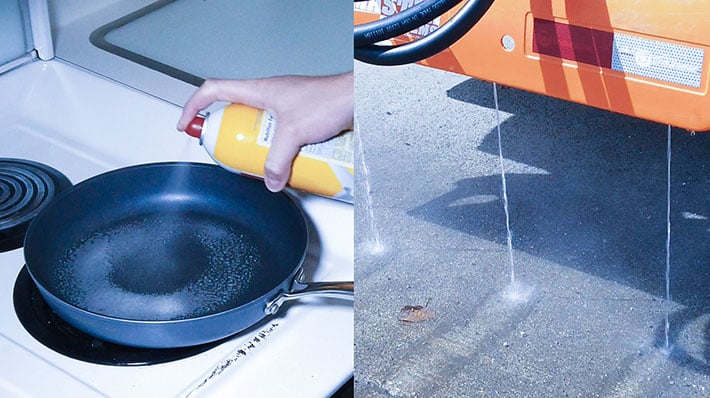 The name of the game particularly when using liquids is, using it as a proactive measure to prevent the bond of snow and ice. In this article, you will learn about the importance of preventing the snow and ice bond with liquid brine, why it is so effective, and how you can reduce your salt output.

So let's think about this analogy that I've always loved to use. If you took a stick frying pan and did not spray some sort of a non-stick formula to that; what would happen if you took a nice juicy steak and fried it (rather than grilled it) on that pan? You would probably burn or destroy the steak, but in the process you're also creating this bonding on to that pan. That's essentially the same thing that we do as "business as usual" now on our parking lots & sidewalks.

Why wouldn't we approach it proactively, (the same way we would do with a stick pan) by spraying something on it first? It only makes sense to use this proactive "bottom up" approach that makes scrubbing the surface clean again require a lot less effort. If you thought about scrubbing that pan clean again, how much effort would it take to do that if it were to be sprayed proactively first versus not sprayed. It takes 4X the amount of effort. It would also take about 4X the amount of soap and amount of time scraping the pan.

Isn't that the same thing we're doing to our parking lots now when we use rock salt? We salt, we scrape, we salt a little bit more and then scrape a little bit more until we finally get that last layer of bonding off the surface.

Does Pre-treating with Brine Decrease Salt Use?

From there we have to think about "what are we trying to achieve beyond that"? What we don't want to expect is that preventing the bond is actually going to prevent snow from accumulating. That's where I've often seen this over sold. So let's not over sell the benefits of this. It could result in less snow accumulation depending on if other conditions that have an effect on that are at play.

If we get that clean scrape, let's think about that just like the frying pan analogy. How much less effort is it going to take to keep that surface clean or to clean it up to perfect?

Now all you have to do is just spray liquid again. Like in this particular product right here, you can take it from a pencil tip all the way to a fan tip. If it's me spraying, I'd want to direct liquid apply this proactively with a pencil tip, and then move on to using a fan tip to then just maintain the level of brine on the surface and then get that nice even coverage so that any glazing effect that has occurred is dealt with immediately.

Rather than if you tried to deal with that same glaze effect with a solid material instead of an instant reaction with the liquid, you now have to wait that 30, 45 minutes, to an hour time frame depending on the temperatures, depending on relative humidity for that to react to moisture either in the air or if there's any accumulation still coming down. Would you rather deal with it immediately or wait 30 - 45 minutes or more?