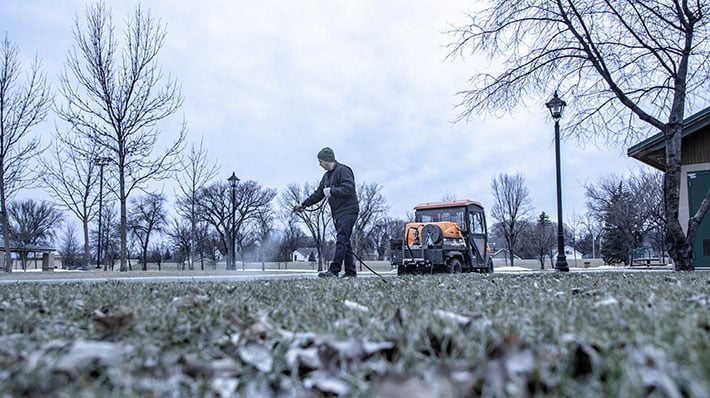 In this MASTER TRAINING (by ICE MASTER SYSTEMS®) on liquid brine deicing with Phill Sexton with WIT Advisers you will learn the LEVEL OF SERVICE BENEFITS OF LIQUID BRINE.

What does that really mean and where does salt use and changing the way we do that fit in to that. Salt use has been used more as very much a reactionary method to break the bond of ice. Now we're thinking about it more from a proactive standpoint.

So more of a bottom up approach versus a top down approach. More of a pre-storm versus post-storm. So thinking about that in terms of "why would the customer care about this, or the property owner?" Really what it boils down to is their level of service expectations.

You may have for example, a client that you've been working with for many years now. Generally speaking clients always expect a little bit more every time we do something. They expect a little bit more related to their level of service. So we've gone from an industry that white parking lots or semi-hard packed roads were acceptable at one time years ago

It's gotten to the point where the clients perception of quality of service is seeing the salt on the surface. That's one of those mindsets we're going to need to change because you don't necessarily need to see it for it to work, and generally speaking when you don't see it, that's when it's in brine form and that's when it's actually working. So that paradigm shift is something we're going to have to think about next when we talk about the level of service related to what our customers expect to see and expect to get as far as level of performance.

When you drill down on just what it’s providing you as an applicator for level of service and how it’s performed, in the traditional model using solid salt, the salt comes whipping out the back of the spreader (most times nobody is measuring the actual amount so not only do we not know what the application rate is).

Many times those application rates are very inconsistent because depending on if it’s a different pile of salt or depending on the moisture content, there could be twice as much or twice as little coming out of the back. Then you have the issues with clumping, or clogging the spreader. So that’s actually more downtime and frustration at the operations level.

Once the application has reached the surface of the parking lot or side walk there’s that bounce and scatter effect.

RIGHT AWAY THERE’S AT LEAST 20% WASTE

Would you rather have the brine go down immediately or wait 30-45 minutes for it to convert to a brine? Which one is going to give that client of yours the level of service they’re really expecting? Now let’s look beyond the traditional way we see it. We see a parking lot, we see a side walk. But let’s think about it in terms of the landscape and what that’s doing to the external periphery of the property.

In most cases we're creating burn and problems with...

It may not be a first year affect but it’s a cumulative effect over years. Mostly, that's what's killing things like...

And in many cases our customers are having to budget for the issues we are creating with salt to be rectified in the landscape season. Now let’s think about this from the perspective of the building which is sometimes the easiest way for us to think about it relating it to our clients experiences. Many times our clients are...

...and a lot of their focus is really at the building level and inside the building. So rather than look at it from this exterior view let’s think about what happens to salt right at the doorway and as it enters into the building. There have been studies that have shown that…

THAT SOLID ROCK SALT IS LIKE 100 GRIT SAND PAPER

So imagine what that’s doing to flooring, and to door jams and when it gets inside the building and into the escalator or elevator system. Many times when you see systems broken down in a building, that’s usually the reason why. Because that material has made it into the system and caused some sort of corrosion or malfunction.

What if we could change the way that we do this, so that there’s no solid material ever entering that building. That’s where liquids come into play.