Economic Benefits of Liquid Brine [3 of 10] 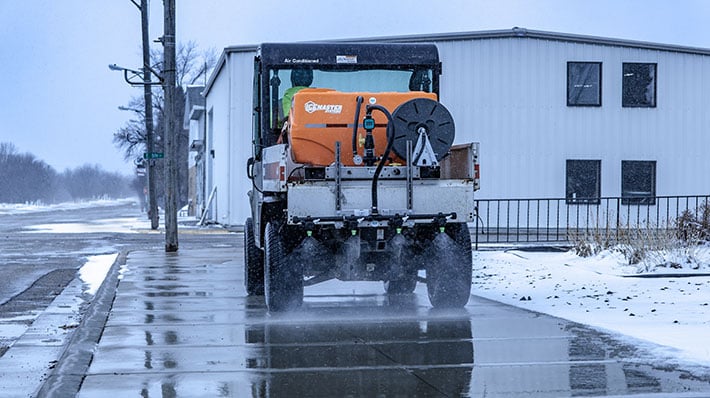 In this MASTER TRAINING on liquid brine deicing with Phill Sexton with WIT Advisers you will learn the economic benefits of using liquid brine for snow and ice control. Benefits including less salt use, time saving, equipment cost savings and more.

Why are Liquids a Better Alternative?

We need to think about the mindset of using liquids as a better alternative and understand why switching to liquids would be a no-brainer decision.

There needs to be strategies incorporated to doing it a different way to address that, and this is where liquids become a fairly significant tool in the tool box. So, looking at the economic benefits of liquid brine, let's think about it beyond even salt use.

There’s the economics of...

And there's also the economics of redo work or doing things haphazardly so that it's causing us to apply more material or spend more time on it (when using solid salt), rather than taking a more proactive approach (e.g. using liquid brine to pre-treat the area before the storm).

Does Liquid Brine Reduce Salt use?

Why I get so confident about this is, when we look at our sustainable winter management program SWiM®, there's been a third part case study done that's looked at the benefits (not just from salt outputs or economics, but others as well). From the standpoint of salt output, we've been able to see in many cases...

Does Using Liquid Brine Save you Time?

Let's take it a step further. When you think in terms of a third-party case study that was done on these results by Rochester Institute of Technology, here's what they found. Not only was there this savings in salt output and this obvious economic benefit but then it provided other benefits including...

Now that might not make sense at first when you think about right now brine is sort of perceived as this 'other service', or this thing that you do before the storm but I'm going to continue to do these other things that I've always done after the storm or during the storm. But that’s not really what happens. What happens is once you take this more proactive approach...

When there are fewer trips there is...

By using liquid brine instead of rock salt you're...

So it’s sort of a four sided coin now of what the benefits are rather than just this economic, environmental proposition.