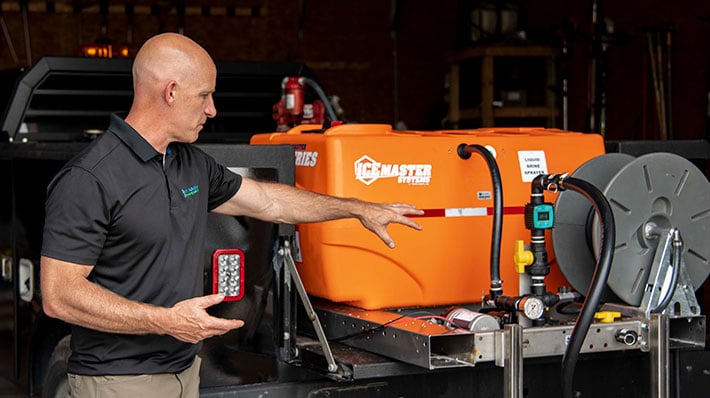 Let’s put a bit of science in to practice here on what we’re talking about regarding the difference in rock salt and liquid brine. To keep it simple, the solid rock salt that we’re using currently, doesn’t do anything for us (in terms of melting the ice) until it converts to a brine. Therefore, salt brine is the liquid form of the traditional salt that we use in the industry (sodium chloride). There are others that we also use, like magnesium chloride and calcium chloride.

Our goal when using "solids" is converting the solid rock salt to a liquid so that it can do its job. We want it to get to a liquid quicker. So, it’s all about moisture. With rock salt, you must wait for the solid salt to react to moisture.

That Moisture Comes from Either:

If it’s grabbing moisture from the air, the conversion time is going to take that much longer versus having that instant reaction with the liquid.

What the liquid brine is doing (if it’s sodium chloride) is depressing the freeze point of water at the surface, so the water will actually freeze below the 32° F mark now (usually at around 20° is the practical effectiveness of sodium chloride brine).

Which Option is the Most Effective?

So, in order to achieve the goal of having this concept of using liquids as a no-brainer, I think it’s really important to state clearly that...

The way that salt works is SOLID ROCK SALT DOES NOTHING UNTIL IT CONVERTS TO A LIQUID BRINE (and liquid brine is what goes in the sprayer tank on a deicing sprayer).

That’s the opportunity we have... rather than wait a period of time for that conversion to happen (from rock salt to liquid brine) we are essentially removing a step or two in the process to get directly to the result which is coming out of these spray tips.

Think of it as solid salt coming out of the spray tip on your liquid brine sprayer... it’s just in a much more concentrated form and it’s going exactly where you need it to go. It just happens to be liquid, but it’s the same exact thing. Make sense? Instead of it spraying/flinging outwards (and getting all over plants and doorways) it’s spraying straight down on the ground.

I hope this article has helped you understand the differences in rock salt and liquid brine and helped you in your journey to using liquids as a tool in your operation. To shop our variety of liquid brine sprayers, visit our website. If you have any questions, feel free to comment below and we'll get back to you.