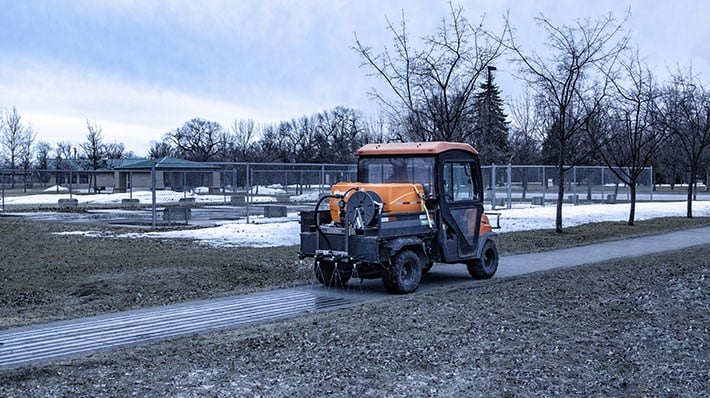 Now we're at the point where we've really got to start having a discussion about how are we going to inspire this change, or make this paradigm shift from business as usual using solid salt to thinking about transitioning to this liquids methodology. In this MASTER TRAINING Phill Sexton with WIT Advisers will go over what the barriers are of switching to liquid brine for de-icing in snow and ice management.

So first, who is it we're trying to convince that this is a no-brainer?

Number two is "who are we doing this for?" and that's our customers.

Don't we need to convince them before we're enabled to practice a different way?

Convincing the property owners and property managers the same thing that we have to convince ourselves that it's the same thing, just in a different form. That's important to state clearly and simply.

In order for us to convince ourselves and our customers, let's address what the barriers are.

The barriers are in 2 primary categories.

The liability in snow and ice management is preventing.

If we convert to this liquid form, will that increase our liability? Yes or no?

We've been able to ascertain from even the third party research is in many cases, properties that are utilizing a liquid methodology while preventing the bond (that's the most important piece. The liquid is the most efficient tool to prevent the bond) we've seen results on sites that do it versus sites that don't do it a

That may not be enough to convince people so the other think to think about perception & perception in this case is seeing the salt is a perceived level of service expectation that most properties have.

"If I don't see the salt, that means there's a greater chance that there's going to be a slippery condition"

Which is absolutely false. However, perception is reality in this case.

We're going to need to address to the industry at large how we change that perception so that not seeing it, doesn't necessarily mean that it's not working.

There are a couple ideas to think about. I've seen tracking dye being used.

I don't always recommend that though because that can cause some other perceived issues as far as “Is it going to stain? Is it dangerous? If it's blue or red does it mean there's some other chemical in it?”

Sometimes it can be done with a broad stakeholder engagement to say. "It's been done this way in the past now we're going to do it this way".

Sometimes it's just plain old communication to say "understand that we're testing this new method, and here's the results that we're expecting to achieve. We'll keep you up to date".